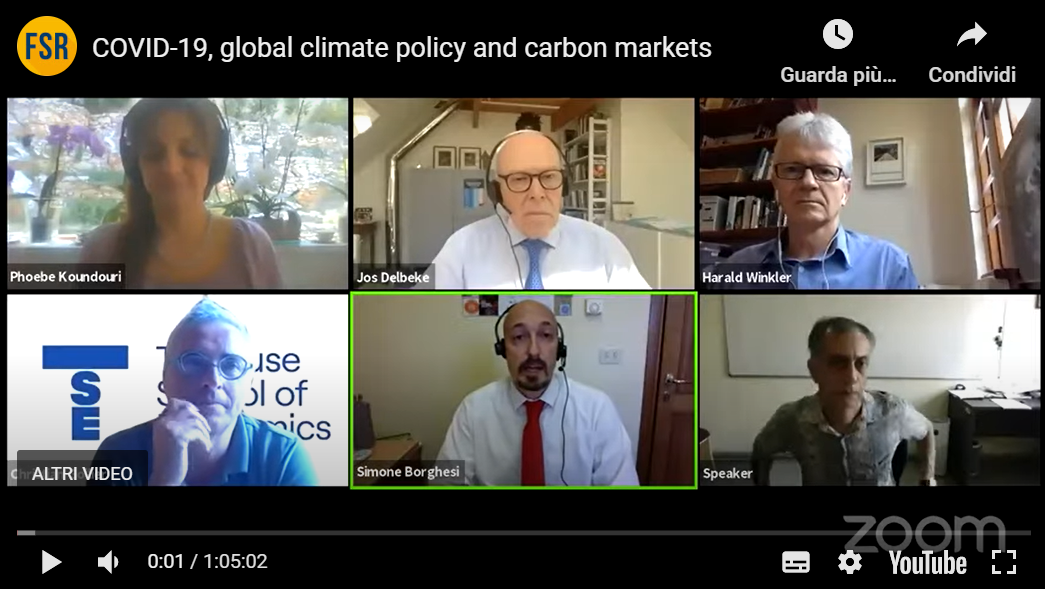 The pandemic is posing serious challenges to all our lives and research is inevitably affected with lots of events cancelled or postponed. This obviously applies also to our LIFE DICET project in 2020. But on May 7, 2020 our LIFE project won its bet over the difficulties due to COVID-19. It was just a tiny little battle in a much bigger war against the virus, just one game in a long playoff series, by just one point in a close game. But still a meaningful victory.

The victory of the Policy Outreach Committee of EAERE and FSR Climate was that of managing to organize in short time an online event on “COVID-19, global climate policy and carbon markets” which could replace the workshop that was originally planned for the State of the Union here in Florence. And the event turned out to be very successful both in terms of numbers of participants (388 attending the events and many visualizations on Youtube) and quality of the interventions. Each speaker enriched the debate with his/her own views bringing heterogeneous perspectives from all over the world and from different economic contexts.

As any memorable victory, there are backstage stories to tell. In this case, at least two of them (before and after the event) are worth mentioning.

Before the beginning of the live event we had to solve some technical issues which were complicated by the need to keep physical distance with my team members. As the problem could not be solved, I eventually had to run to another computer just two minutes before the live event started. No more time for thinking: sit down and go….I share with some of my team members an insane passion for basket and one of them wrote me: “That was a buzzer beater from your side, you entered the webinar cold as ice!”. I was actually melting for the running and the tension of not knowing how to solve the technical problem till the very end, but good that everything was successful in the end.

But the best part of the backstage stories came after the event. I was trapped in a long series of online meetings the whole afternoon. When I finally finished, I found lots of email exchanges among the speakers who continued to discuss, exchange documents and ideas until late at night. I found this simply amazing. It made my day to see how deeply involved all of them are in discussing possible solutions. This capability of provoking ideas and further debates is what makes an event really successful. It is particularly meaningful, in my view, because it shows the capacity of our LIFE project and of enthusiasm for research to win over the difficulties and deliver its results.

The fight versus COVID19 is a hard one and a long way is still to go. Some of us lost friends and relatives in this fight. But we know we can win if we stay distant but united. Well, our event was a little, still important, example of what we can do as a research community keeping distant but united.